A buying opportunity with Austal 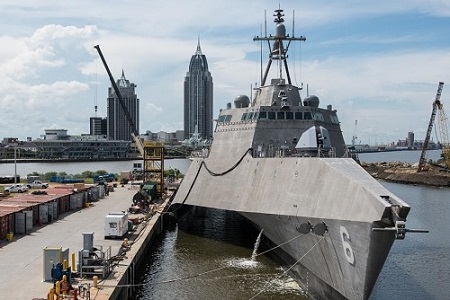 Shares in Austal (ASX:ASB) have eased back from multi-year highs. We have a look at whether there is further upside and when is the best time to buy it.

The main aspect of Austal’s business is the design and manufacture of defence and commercial vessels. These include the Littoral Combat Ship (LCS) for the US Navy and military high-speed vessels for transport and humanitarian relief, such as the Expeditionary Fast Transport (EPF) vessel. The LCS is a 127-metre, Frigate sized vessel built at the Company’s facility in Mobile, Alabama. ASB’s LCS program is in a full rate of production with several ships under construction simultaneously.

At present, US shipbuilding activities account for over 85% of both US revenue and EBIT.

Why the Fundamentals Have Improved

Investor confidence in ASB has improved significantly as the Company has consistently maintained the US shipbuilding EBIT margin at the upper end of the 6-8% range. This is since the challenges experienced with the LCS program in 2015. Company guidance indicates that the EBIT margin is likely to be stable or stronger in 2H19. However, there is potential for significant margin expansion over the long term from new contract wins and an increasing portion of maintenance work.

We also consider that the Company’s medium-term earnings are becoming less exposed to macroeconomic headwinds. This is given the long-term nature of defence and support & maintenance contracts secured by ASB. These contracts underpin ASB’s attraction as a defensive play when broader market conditions are challenging.

Austal won a significant amount of contracted work in 1H19, led by its US shipbuilding operations. Since early September 2018, ASB has been awarded contracts to construct four littoral combat ships (LCS 32, 34, 36 & 38), and well as long-lead-time material contracts for the future construction of two EPF vessels. Across the business, the order book sits at about $5.2b, securing work out to 2025. This is up from $3.4b in December 2017.

The important point is that the new contracts are not expected to translate into margin expansion over the short term. This is given that a significant portion of that revenue will be from early stage procurement and production for new vessel designs, or existing designs that are undergoing material modifications or upgrades (particularly the LCS and EPF programs), and profit has been recognised at a lower level for revenue generated during those phases of construction.

Significantly, an improved competitive position has placed ASB in a stronger position to win further contract work over the medium term.

Over the last two years, Austal has established a significant LCS support capability in San Diego where the vessels are home based. This capability is in addition to the support resources based at the shipyard in Mobile, Alabama. ASB also has other service centres around the world. These factors have contributed to revenue from support and maintenance work increasing by ~50% in 1H19 to $90.1m. At present, there are currently +20 vessels undergoing maintenance work.

Austal has been awarded additional LCS contracts (with this program likely to see a further ~20 contracts awarded to either ASB or Lockheed Martin under the current LCS program), the potential for the secure additional support and maintenance work improves the EBIT margin profile over the medium-to-long term – as earnings from support and maintenance work provides a greater portion of annuity-style revenues and the margin earned is higher than shipbuilding.

Non-US Operations Have Benefited from a Scale-up of Capacity

There has been a significant improvement in the financial performance of the Australasian operations. These include shipyards in WA, the Philippines and Vietnam. Throughput across Australasia increased in 1H19, as the Company worked on ~$660 of commercial ferry contracts. The Company delivered the first of 21 Guardian Class Patrol Boats (GCPB) in December 2018. Profitability is expected to improve as a result of increasing efficiencies being generated as the program matures at full rate production.

ASB has invested to double the existing capacity at the Philippines shipyard and a recently-opened shipyard in Vietnam has scaled up well. The shipyard in Vietnam is considered a key driver for the Company’s medium-term margin expansion. This is because employee costs are less than 10% of Australia’s, which more than offsets lower productivity. There is also potential for the Philippines shipyard to contribute to group margin expansion, as overhead costs are expected to remain fairly stable.

An improvement in the cashflow performance in 1H19 has placed the balance sheet in a net cash position of $54m. This supports future dividend payments, helps to fund the expansion of existing commercial shipbuilding facilities, and fund upcoming bids under the LCS program. Further, operating cashflow in coming years is being supported by a number of contract wins secured in FY18 and FY19 to date.

With the shares currently trading on a 1-year forward P/E multiple of ~15x, which is above the mid-point of a fairly narrow trading range of 14.0x-15.5x over the last two years. We consider that any weakness from current levels would present a more attractive opportunity.

Our charting comments on ASB in 2018 noted the breakout from the long-term sideways range, and we expected a rally beyond $2. The shares have been building up nicely since the start of the year, with volumes looking impressive on the way up. In the last few weeks though, we have seen it rally to a new high before being sold down again. On this weekly chart, we can see a reversal forming (circled). This means that we should see a bit more weakness in the short term. We would be looking at support closer to $2.20. If ASB can find support back there, then that would be a better entry point for investors.