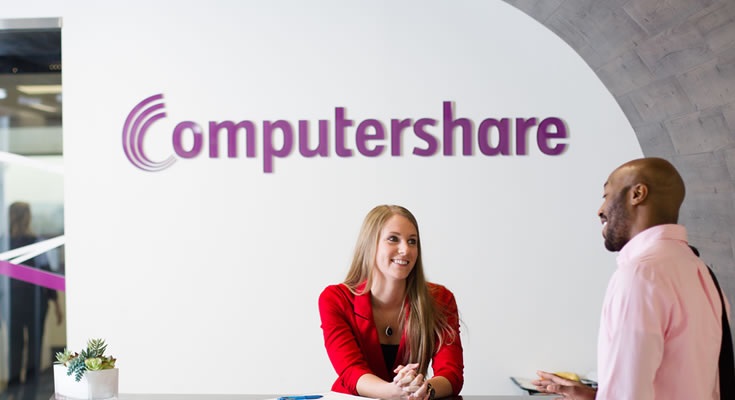 Shares in Computershare (ASX:CPU) have performed strongly this calendar year as the prospect of higher interest rates (to which earnings are highly leveraged) coupled with strong interim results and guidance have supported the shares. We recently researched CPU to assess whether the recent weakness in the share price presents an opportunity.

Computershare is the only integrated global provider of share registry administration services. It has operations in most major markets. Registry maintenance provides a stable revenue stream (but with more volatile, yet higher-margin corporate actions business also a contributor). The Company manages customer cash balances, on which it generates an interest margin that is exposed to global interest rate movements.

While CPU reports across seven divisions, the main contributors to revenue and earnings are the Issuer Services, Mortgage Services and Employee Share Plans divisions.

Around 80% of revenue from the Mortgage Services division comes from the US Mortgage Services operations. The majority of the balance is derived from the UK mortgage servicing business, which CPU is exiting. This is because it was not profitable in FY20-21. In 1H22, US Mortgage Servicing reported Unpaid Principal Balance (UPB) growth of ~0.9% compared to 2H21. This followed declines in the last two halves. Growth was supported by lower run-off rates, with growth in UPB expected to accelerate in 2H22 (to ~+3%). This was given the lifting of foreclosure restrictions from 31 December 2021. The latter is one of the key factors underpinning the outlook from FY23+.

There is potential for a return to stronger growth in the US mortgage servicing division. This is given that refinancing rates are falling, thus supporting loan balance (UPB) growth and reducing balance sheet strain from mortgage service rights purchases.

One of the factors impacting the outlook for FY23 is the presence of expense inflation in all major lines, with inflationary pressure likely to continue into FY23-24. CPU completed its annual pay review in October 2021 and the resulting wage inflation is factored into FY22 guidance, thus lowering the risk of wage inflation in FY22; whereby only new hires will be impacted.

However, recent Company commentary indicates that wage inflation across all business lines has been quite strong and is anticipated to continue into FY23. Importantly, we do not expect that the potential for higher-than-expected inflation presents a risk for either FY22 guidance or FY23 earnings, especially given the strengthening outlook for margin income.

Unlike most tech companies who suffer from higher interest rates, CPU benefits from the margin income it earns on cash held on behalf of its share registry clients. This is before dividends and other distributions are paid to the clients’ shareholders.

At the 1H22 results release, the Company disclosed that a 100 basis points increase in interest rates on the exposed average balances as at 31 December 2021 would generate an annualised EPS increase of US26 cents per share. This is significant given that EPS guidance for FY22 is for US57 cents per share.

CPU has a skew to overnight and three-month rates, but has some exposure to rates up to five years. The greatest exposure is to US rates, which make up more than half of its margin income, followed by the UK. At the 1H22 results release, the Company increased margin income guidance for FY22, given higher balances and its own internal assumptions of higher cash rates in the US.

Recent rate increases by central banks in US and UK have prompted forward rates to continue to steepen. This is important considering CPU management guidance extends only to 30 June 2022 and allows for only modest rate increases. Notably, market estimates are factoring in as many as six interest rate rises globally over 24 months. This is in light of the hawkish tones coming from the US Federal Reserve and other central banks amid persistently high inflation.

The Company believes that it can keep all upside on interest rates and that non-margin income would not be competed down. This remains to be seen, given that upside from interest rates into FY24 may get competed away in wholesale markets like corporate trust. This may take some time to play out, however.

Gearing Expected to Decline to Lower End of Target Range

While the current gearing level is near the mid-point of the target gearing range of 1.75x – 2.25x, CPU expects gearing to reach the bottom end of the target range by 30 June 2022. Gearing (in the absence of any further acquisitions) is expected to decline further by the end of FY23 given that operating cashflow is typically strong and is likely to be supported by higher margin income.

As gearing declines towards the bottom end of the target range, we would expect the Company to pursue further Merger & Acquisition opportunities and/or capital returns to shareholders (most likely in the form of special dividends).

CPU offers one of the better leverage plays to rising interest rates (in particular US rates). As such, we expect the shares to eventually be supported by: i) Investors seeking such an exposure as a portfolio hedge, ii) An outlook for improved growth rates for the Mortgage Services division, iii) The potential for higher-than-expected margin income to offset cost pressures and lack of operating leverage in the Issuer Services division, and iv) The potential for M&A/capital returns as a result of a lower forward gearing profile

CPU has been trending nicely over the past year or so and it still continues to look positive here. The recent pullback from the April high has been fairly orderly and the share price is back at support. As long as the broader market can hold up here, we would view current levels as a buying opportunity. However, if it was unable to hold $23, then the next support level down is near $21.