Why APA shares can head higher from here 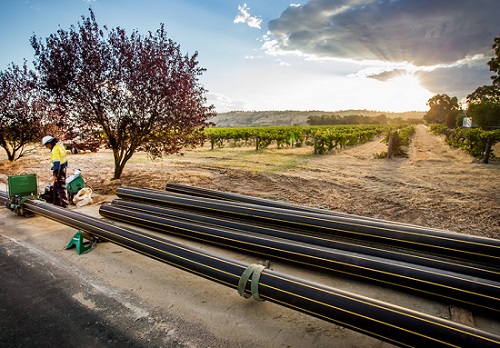 We recently identified APA Group (ASX:APA) as a stock likely to outperform the broader market in the near term. Since our recent report on APA over two weeks ago in The Dynamic Investor, APA shares have indeed outperformed the S&P/ASX 200 Index by around 150 basis points. At times, this outperformance has been as much as +460 basis points. While this is a ‘rear-view mirror’ assessment, we outline the case for APA shares to continue heading higher.

APA Group owns and operates gas transmission and distribution assets across Australia. It also holds minority interests in other energy infrastructure businesses. The Company operates under a stapled security structure and is internally managed.

In recent years, APA’s growth has been driven by a combination of Mergers & Acquisitions (including the acquisition of Hastings Diversified Utilities Fund and the Wallumbilla to Gladstone Pipeline (WGP)) and organic investment (power generation, gas processing and storage).

Why APA Shares can Continue to Perform

At the results release for the six months to 31 December 2019 (1H20), the Company maintained dividend guidance for FY20 of 50 cents per share. There is potential from distribution to grow by 4-5% on a CAGR basis over the course of FY20 to FY24. This is given increasing EBITDA (driven by new assets) declining debt serviceability (i.e. the refinancing of expensive debt into the low interest rate environment as it matures), an increasing growth-CAPEX profile over the next three years and the lower A$ (vs the US$), which benefits earnings from the US$-denominated WGP asset.

2. The Revenue Profile is Highly Defensive

APA has certainty over >90% of group revenue over FY20-21e as term capacity reservation contracts and regulated revenue caps protect APA from volume risk in an economic downturn. In particular, 78% of the estimated revenue for FY20 is secured under term take-or-pay capacity contracts, 9% via regulated access regime (2018-22) applying a revenue-cap form of price control (where end-users assume volume risk) and 3% secured by fixed revenue contracts. So, this means that only 10% of APA’s revenue is exposed to material changes in volume.

The high degree of certainty in the revenue profile effectively provides APA stable cashflows which has allowed the Company to deliver reliable EBITDA guidance range over a number of years, as well as service the high level of debt.

In light of the recent decline in oil prices, none of APA’s revenue contracts are oil-linked and as such, there is no commodity price exposure. Further, APA’s currency exposure (in light of the weak A$) is also limited to the WGP.

APA’s revenues are also considered to have very low exposure to COVID-19 impacts. Of its Energy Infrastructure revenues (95% of group margin-generating revenues), 91% are take-or-pay or regulated in nature, 93% are sourced from customers with an investment grade credit rating, and the customer mix is broad-based with a spread across energy (48%), utilities (24%), resources (21%), and industrials (7%). The revenue-weighted average contract term (excluding extensions and variable revenues) is greater than 12 years.

3. Lower Bond Yields Are a Positive for APA

Bond rates are a key earnings driver for APA, as they impact valuation discount rates and effect the cost of new debt and unhedged existing debt. Lower GDP growth forecasts for Australia and recent rate cuts to the official cash rates announced by the RBA is likely to provide a tailwind for APA’s valuation, with the 10-year Australian bond yields at 0.76% (at the time of writing).

Aside from the expected valuation uplift, a key benefit from lower bond yields are that they present no near-term risk to regulated rates of return, as none of the three key regulated assets commence regulatory resets before 2022. Further, lower bond yields provide debt refinancing opportunities, given that the Company’s ~A$600m of debt facilities have an effective interest rate of 7.3%.

Cashflow performance in 1H20 was strong and FY20 is likely to be see operating cashflow cover 100% of CAPEX and dividend. This appears sustainable in the absence of a large acquisition or a material uplift in the pace of CAPEX. In relation to the latter, increased growth CAPEX requirements can be funded by internal cashflow, with cash generation relatively strong despite the Company moving to a tax paid position.

5. Acquisitions Remain on The Agenda

In addition to the organic growth opportunities referred to above, the Company had (prior to the COVID-19 outbreak) outlined that it was working on a potential acquisition of a US gas pipeline business. Such assets in the US generate a more attractive Return on Funds Employed (ROFE) profile in comparison to assets in Australia (i.e. 9-10% vs <5% in Australia).

While the opportunity for an acquisition in the US has undoubtedly been placed on hold indefinitely in light of the COVID-19 pandemic effectively shutting down the US economy, we consider that an acquisition is likely to be completed over next 2-3 years. Based on the expected size of any acquisition (US$2-4b), a capital raising is likely at some stage over the medium term in order to partly fund the acquisition, based on current balance sheet metrics.

For a period of about 4 years, APA shares were trading in a range between about $8 and $10. It broke higher in 2019 but recent events have seen it fall back into that range again. We can see that it has been bouncing very strongly off that $8 level which means that it should once again offer some support. They are currently trying to stay above the $10 now. If this can hold, then the new support level will be $10 and that would imply further upside for the shares.