The factors underpinning a recovery in Monadelphous 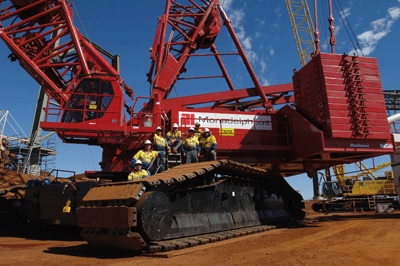 Monadelphous Group (MND) shares have retraced from a recent high of around $18.00 following the release of disappointing full-year results to 30 June 2019 (FY19). On closer inspection of the fundamentals and outlook, we consider that there are a number of factors that could potentially underpin a recovery. The catalyst for this recovery would be what upcoming AGM on 19 November.

The Company provides construction, maintenance and industrial services to the resources, energy and infrastructure sectors. It operates primarily in Australia, with smaller overseas operations in NZ, China, PNG, Mongolia and the US. The Company operates through two key divisions: Engineering Construction (‘Construction’) & Maintenance and Industrial Services (‘Maintenance’). The Maintenance division, which accounted for ~62% of group revenue in FY19, is considered to be the more defensive of the two operating divisions.

After reporting a weaker-than-expected FY19 result – with underlying Net Profit After Tax (NPAT) well below consensus estimates as a result of lower-than-expected EBITDA margin and higher interest charges – the investment case for MND is essentially underpinned by a number of factors. These include: i) The timing of major resources CAPEX and the likelihood/scope of MND’s participation, ii) The extent of any recovery in margin and iii) Continued success in regards to new contracts awarded.

After a 10% decline in group revenue in FY19, the revenue outlook for FY20 to FY22 is more positive (i.e. +10% CAGR). It is underpinned by: i) An increase in CAPEX by the iron ore majors in WA; ii) Increase in oil & gas construction work expected in FY22; and iii) Steady growth in the Maintenance division.

For FY20, group revenue growth is expected to be range between 13-20%. A key factor underpinning this expectation is the solid pipeline of resources project opportunities. This is most evident in the Construction division. The latter is expected to report revenue growth of ~20%. This is underpinned by the Company being well positioned for further major project awards in WA iron ore, an increase in Infrastructure-based construction work (i.e. renewables and water), as well as and lithium and coal and copper.

2. Margins Appear to have Stabilised

The EBITDA margin has fallen from a peak in FY14 (9.5%) to 6.6% in FY19, which is explained by the change in the mix that has seen an increasing portion of the Company’s revenues being derived from the lower-margin Maintenance division. Whilst margins have stabilised at lower levels, margin improvement in the short-to-medium term is challenging, with the Company noting that the market continues to be competitive and customers continue to be cost conscious.

In particular, the labour market is tightening and this represents a risk to margins going forward. Additional to the increase in labour costs, there is also a risk that a lack of experienced staff could potentially result in lower-than-expected productivity. In turn, this could have a negative impact on project execution as well as forecasted bid margins. So, while there is a solid pipeline of resources project opportunities, the high levels of competition and customer price sensitivity will continue to challenge margins growth going forward. Should the Company maintain margin, the upside to earnings is expected to be generated from the revenue growth opportunities referred to above.

The balance sheet has a net cash position of $126m. It has declined recently as a result of weaker-than-expected cashflow performance. Cashflow performance is expected to improve, as the fall in operating cashflow in FY19 was largely due to one-off factors.

Further, the level of cash conversion is generally high, supported by stable (i.e. defensive) operating cashflows, which in turn enable the Company to meet CAPEX requirements and maintain a dividend payout ratio of 70-90%. Cash conversion is expected to increase to ~80% in FY20. This is in-line with its historical average, but below average over the last two years.

MND has a dominant position in the WA iron ore Structural, Mechanical, Piping, Electrical and Instrumentation (SMPEI) market. Mine replacement SMPEI contracts valued at ~$600m have already been awarded at three projects and there are further SMPEI opportunities across additional mine replacement projects, with the pipeline estimated to be ~$1.0b. The total pipeline does not include broader mine sustaining capital projects that MND is expected to participate in.

The majority of the projects included in the ~$1.0b pipeline are expected to be awarded in FY20. Given that MND has won over 50% of the recently awarded contracts, and was a key player in the prior iron ore investment cycle, we consider that the Company is well positioned to secure additional contracts.

MND shares have historically traded at a premium to its peers. The justification for this is that the Company has a strong track record in terms of project execution, relatively low capital intensity, and has a defensive profile (via its Maintenance division which has demonstrated consistent growth). MND shares are also a pure-play exposure on resources CAPEX. The Company is well placed to capitalise on the recovery in mining CAPEX, underpinned by potential iron ore projects in WA.

Following the recent de-rating in the share price, MND is now trading at the lower end of the 1-year forward P/E multiple over the last two years. The market is not yet ready to reward the improved outlook. However, a potential trading update at the Company’s Annual General Meeting on 19 November may be the catalyst that the share price needs.

In June, MND managed to surpass the prior peak from 2017, but it was then sold off. During the last several weeks however, when we look at a weekly chart we can see plenty of price rejection down near $15 (circled). This level of support means that there is a good chance that a low is in place for MND. If MND rallies from here then we would expect the first line of resistance to kick in near $18.