Is this upside breakout for Austal the real deal? 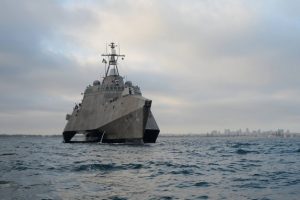 We have long held a positive view on Austal (ASX:ASB). Its shares have recently started to move upwards after being range-bound for some time. In this note, we look at the key reasons as to why the shares may now be starting to come back into favour.

The main aspect of Austal’s business is the design and manufacture of defence and commercial vessels. These include the Littoral Combat Ship (LCS) for the US Navy and military high-speed vessels for transport and humanitarian relief, such as the Expeditionary Fast Transport (EFT) vessel. The LCS is a 127m, Frigate sized vessel built at the Company’s facility in Mobile, Alabama.

The LCS program was initially for 55 vessels. To date, 32 vessels have been awarded, of which 17 have been awarded to Austal and 15 to US-based Lockheed Martin (LMT). US Congress has already indicated that contracts for a further three LCS vessel will be awarded in 2019. The remaining 20 vessels are to be adjusted to a new guided-missile Frigate FFG(x) format.

US Shipbuilding Margins Trending Up

Market confidence in the stock took a hit in 2015. This was after the Company had incurred additional costs as a result of having to meet the shock rating standard under ASB’s contract with the US Navy. The contract stipulates that shock tests are required to test the effect on a ship from a local explosive blast.

Since that period, US shipbuilding margins have slowly recovered and more recently, have tracked above the top end of the 6-8% target range (8.5% in FY18). This validates our earlier view that the Company would have learnt its lesson from the 2015 experience. Further, the US Navy, in September of this year, awarded a contract to ASB for two more Littoral Combat Ships (ASB’s 16th and 17th vessels). The EBIT margin for these two contracts is likely to be above 8%. We therefore expect overall EBIT margin for US shipbuilding to remain above 8%.

After winning $380m worth of contracts in the six months to 31 December 2017, ASB now has a strong commercial vessel order book of over $440m. In context, this is a component of an overall order book of $3.0b. It is across 10 vessel programs in the US, Australia, Philippines, Vietnam and China.

Expanding Revenue in Other Regions

The Company has invested in upgrading the shipyard facility at Henderson (Perth, WA). It is also expanding the capacity at its Philippines shipyard (in Cebu).

The share price had been range bound for the last year and a half, with selling occurring anywhere near $2. Since September last year, the stock had made a few “higher lows”. This was an early indication of some positive buying support. Price action earlier this month was particularly bullish with the share breaking above its long-term resistance line. With the stock now holding on to those levels, it is quite possible that we see it go on to retest the old high near $2.50. This is due of the fact that it had spent a long time going sideways – the longer a stock consolidates, the more powerful the breakout is when it occurs.