Is the upside in Estia Health already priced in? 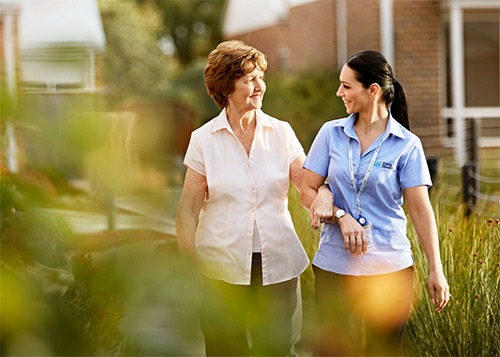 Estia Health (ASX:EHE) is one of the largest residential aged care operators in Australia with over 6,000 beds across Victoria, NSW, South Australia and Queensland.

Since the start of the year EHE shares have recovered in anticipation of, and after, the release of the final report of the Royal Commission into the Aged Care sector in February. However, the shares have struggled to gain ground since the release of the May 2021 Federal Budget. This is because the expected benefits to EHE’s market position and earnings from the increase in Federal Government Funding remain unclear.

With this in mind, we recently researched the Company to assess the likelihood of a re-rating in the shares.

The Company recently reported results for the 12 months to 30 June 2021 (FY21), which was ahead of consensus estimates. This was a result of lower cost growth due to the boost from temporary government funding and grants. This in turn mostly resulted from the pandemic.

Total revenue per operating bed day rose 6% to $323 per day, due to a ~6% lift in government revenues (including temporary funding and grants). In addition, the stabilisation in staff costs (which accounted for 65% of total revenue in FY21) reflects both the additional specific government funding to support providers during the pandemic and reduced COVID-19 outbreaks in the later period of FY21.

More importantly, funding from July 2021 was lifted by $10 per day for all residents without any meaningful lift in costs for quality providers such as EHE.

The final report of the Royal Commission into the Aged Care sector was handed down in February 2021 with 148 recommendations. Of these, 126 were accepted by the Federal government in the May 2021 Budget. The Budget included a headline $17.7b increase in funding over the next four years. Further review and work need to be undertaken by the government before changes will be implemented in the next 2-3 years and will require the passing of new legislation.

Importantly, the government’s commitment to additional funding and response to the Final report signalled a fundamental shift in government thinking towards increasing competition in residential aged care. In essence, many of the proposals, if enacted, will lead to greater cost and administrative burdens on many smaller providers and create increased hurdles and potential barriers to entry for new entrants.

Merger & Acquisition activity has picked up with the Company reviewing many potential acquisitions in recent months. However, with the Royal Commission recommendations directing the industry towards deregulation, EHE sees better opportunities from developing new sites as opposed to acquiring existing facilities.

Will Earnings Become Harder to Forecast?

The move to the new regulations in FY23, including around care (e.g., minimum staff time with residents) along with a new funding instrument are yet to be clarified. In turn, this makes forecasting revenue and earnings difficult. However, as these reforms are backed by large-scale funding commitments, a reasonable assumption to make is that earnings will at least be maintained.

Consensus EPS estimates for FY22 have been cut to reflect a more cautious approach to ongoing COVID-19 costs. At the FY21 results release, the Company highlighted that elevated operating costs in 2H21 can be considered a reasonable proxy heading into FY22. Additional COVID-19-related costs were incurred in 2H21, the same quantum of which are expected to be incurred on an ongoing basis.

The potential for negative near-term earnings revisions from FY23 onwards is underpinned by:

i. The inclusion of ongoing COVID-19 expenses and
ii. The difficultly in forecasting earnings until the planned reforms to funding and staffing/care requirements are clarified means that current earnings forecasts from FY23 onwards (which do not reflect these factors as they cannot yet be quantified) are largely susceptible to negative revisions.

To What Extent Will Improvement in Occupancy Rates Contribute to Earning Growth?

Average occupancy in mature homes lifted to ~92% in 2H21, from 90.6% in 1H21. However, this is below the levels observed in FY19 and FY20 (i.e. prior to the onset of COVID-19). There are already indications that group occupancy rates are beginning to rise in 1H22, which has coincided with higher vaccination rates.

While lockdowns may impact near-term occupancy, the medium- to longer-term outlook for occupancy rates remains favourable, with EHE well placed to implement changes as part of the government response into the Royal Commission into Aged Care.

However, a significant point to note here is that the degree of earnings sensitivity to changes in occupancy is likely to be lower than pre-COVID-19 levels, given the inclusion of invariable COVID-19-related costs on an ongoing basis.

The current gearing level (1.3x on a net debt to EBITDA basis) is below the target gearing level of between 1.5x – 1.9x. Coupled with sufficient liquidity, this provides the Company with significant balance sheet capacity to fund its development pipeline.

Over the period FY22-24, EHE is facing a higher CAPEX profile, in order to fund future greenfield sites. In light of the increasing CAPEX profile, EHE will need to maintain a solid Refundable Accommodation Deposit (RAD*) inflow from new facilities in order to maintain its gearing targets and fund its development pipeline. While maintaining/increasing RAD inflows would ordinarily prove challenging – as the preference for RADs is dropping – the Company believes it can continue to fund future greenfield development projects with RAD inflows

* A Refundable Accommodation Deposit (RAD) is one way that aged care residents can pay for their room. The RAD is paid upfront and guaranteed by the Federal government and is fully refundable upon departure.

EHE shares are currently trading on a 1-year forward P/E multiple of ~27x, which is well above the long-term average and at the upper end of the recent range. At current levels, the market is factoring in the potential benefits from the increase in government funding (i.e. higher occupancy, lower competitive pressure). Importantly, the potential benefits are more likely to materialise over the medium- to longer-term and too difficult to quantify at present given the lack of detail available from the government on both the raised care requirements and new activity-based funding model.

Accordingly, we take a cautious view on the EHE fundamentals, especially given: i) The potential for negative near-term earnings revisions from FY23 onwards and ii) A likely reduction in EHE’s earnings sensitivity to changes in occupancy rates.

An upside risk to our view is heightened corporate activity for the aged care sector, as evidenced by competing takeover proposals to acquire ASX-listed peer Japara Healthcare (ASX: JHC). It is also worth noting that EHE has a solid portfolio and open share register.

After peaking in May, EHE entered a downtrend. At the moment though, it looks like it is trying to level out. In August we saw it retest the July low and bounce off it which is a first sign that it is trying to find support. What we need to see now is how it behaves with support at $2.20 and the recent peaks near $2.48. A break above resistance would be a positive, and indicate that it is ready to head higher. A break under $2.20 support would be viewed as a negative.