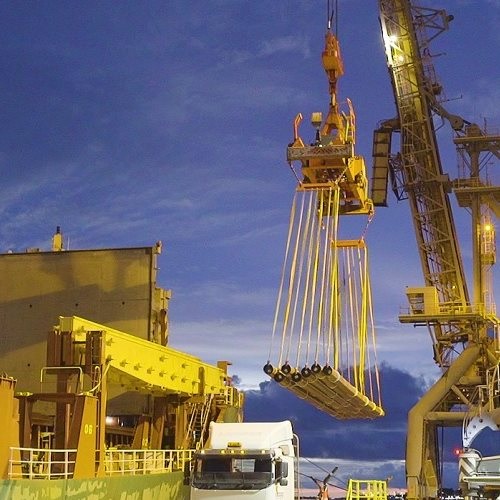 Qube Holdings (ASX:QUB) has been a drawcard for investors due to the settlement of the Moorebank project. This provides management with scope to focus now on capital allocation. In turn, this has the potential to generate earnings per share growth and higher returns.

Since the start of the year, the shares have been mostly range-bound, as the market grapples with the potential timing around the settlement as well as the extent of the expected improvement in financials. More recently, the shares have broken out if its range following the release of the Company’s results for the 12 months to 30 June 2021 (FY21).

Accordingly, we recently researched the Company to assess the potential upside in the shares.

Qube Holdings provides comprehensive logistics solutions across multiple aspects of the import-export supply chain. In addition, QUB is involved in the management, development, and operation of strategic properties with future development potential into logistics facilities.

The Company operates through two divisions: 1) Operating Division, including Logistics (road and rail container transport as well as other services required in importing and exporting containers) and Ports & Bulk (bulk and general stevedoring; and 2) Infrastructure & Property, which holds strategic development projects or infrastructure assets that complement QUB’s import/export logistics division.

QUB also owns a 50% interest in Patrick, which is a national operator of container stevedoring services in the four largest container terminal ports in Australia.

The Moorebank development (located 27 kilometres south-west of the Sydney CBD) comprises 240ha of land. QUB are developing an intermodal terminal (i.e., rail to road) and a substantial amount of co-located warehouses.
On 25 February 2021, QUB entered a non-binding commercial term sheet with the LOGOS consortium for the sale of 100% of its interest in the warehousing and property components of the Moorebank Logistics Park (MLP) project. In July 2021, the Company announced binding terms had been agreed and completion is expected in the December 2021 quarter.

On completion, LOGOS will acquire 100% of QUB’s freehold land in MLP, 100% of Warehouse Trust (leasehold interest in MLP warehouses) and QUB’s 34% interest in Land Trust (leasehold interest in MLP land). QUB will retain ownership of the intermodal rail terminals. The significance here is that by retaining full ownership of the intermodal terminals, the return from these assets is expected to be above the Weighted Average Cost of Capital (WACC).

The sale of Moorebank’s land and property assets has the potential to materially reduce gearing, support Merger & Acquisition opportunities (especially into higher-returning logistics opportunities) and provide the Company with capital management options. The latter is likely to include a ~$400m share buyback, which may be announced at the interim results release in February 2022.

Further acquisitions and contract wins are important for the Operating Division, given that organic growth over the last 3-4 years has been limited – as capital deployed would have added to earnings.

Performance of IMEX Terminals Below Expectations

The IMEX Terminal has been operating in a start-up manual mode in parallel with the construction of the automated terminal. Volumes through the manual IMEX Terminal have been modest, mainly due to the recent NSW Government policy to permit higher capacity A-Double vehicles to operate at Port Botany, which has reduced the competitiveness of rail relative to road to the Moorebank catchment area.

Development of the automated IMEX terminal continued during FY21 and is expected to be completed and operational in 3Q22.

The FY21 result included a non-cash impairment of the Moorebank import/export terminal and associated assets, which reflect the slower ramp up in volumes compared to QUB’s business case. As a result, the high fixed costs associated with the automation are not expected to be recovered in the short term, leading to negative earnings and operating cashflow until volumes reach the necessary scale to generate the target sustainable earnings and positive cashflow.

Patrick (held 50% by QUB in a joint venture with Brookfield) provides QUB with vertical integration across road, rail and port, and reliable earnings that are lowly correlated with other risk assets. Patrick is considered the most profitable of all stevedores nationally and has a high overall market share of around 44% across its four terminals.

EBITDA growth of +27% on sales growth of +9% in FY21 indicate strong operating leverage. FY21 profitability benefitted from increased volumes, some improvement in productivity, as well as a full period impact of higher landside charges and increased ancillary charges. In context, Patrick’s charges are also the highest rate amongst its competitors in all the four major ports.

In contrast, Patrick’s operating margin (EBITA/revenue) is well above this on a comparable basis – generally around 20-25% and has been supported by an increasing portion of terminal access charges. These charges, which now account for over 25% of total revenue across the industry, have acted to mitigate the decline in core quayside revenue.

Overall, we struggle to see any material catalysts for the shares over the short term. QUB is currently trading on a 1-year forward P/E multiple of 35x, which we consider stretched in light of:

i. The cyclical exposure of the earnings and the capital required to sustain and grow earnings.
ii. Consensus estimates for EPS growth of ~13% over FY21-24 on a CAGR basis, which appear to factor in ~$400m in share buybacks. Importantly, the potential for further acquisitions provides upside to EPS growth estimates over the medium term.
iii. Valuing QUB’s underlying business can be complicated, given that the Moorebank project comprises a significant portion of QUB’s enterprise value, has consumed considerable capital ($1.25b) yet produces no earnings.

In the last few months we have seen the share price of QUB rally up towards the 2020 peak and then find resistance up at that level. At the moment it looks as though it is struggling to make much headway and we are therefore likely to see lower levels in the short-term. Strong support exists near $3, so if we can see it ease back to that level and form a “higher low”, then that would be a better buying opportunity than current levels.