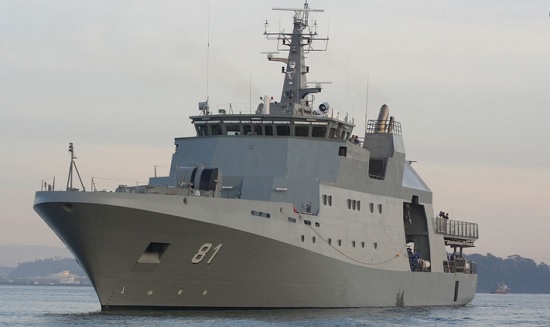 We recently reviewed Austal (ASX:ASB) after a sell-down in the shares placed ASB in ‘value’ territory. While there were valid reasons for the weakness, we wanted to examine these further, as well as assess whether there were any positive catalysts.

The recent weakness in the share price was attributed to market concerns about: i) ASB’s ability to replenish its shipbuilding pipeline, ii) The ongoing investigation by US regulatory authorities and iii) Whether the Company can maintain earnings (EBIT) guidance in light of a lower revenue growth profile over FY21 and FY22.

The share price has risen significantly since our recent report in The Dynamic Investor on 30 March, suggesting that ASB was far from being a value trap. Accordingly, we consider whether ASB still offers value at current levels.

The main aspect of Austal’s business is the design and manufacture of defense and commercial vessels. These include the Littoral Combat Ship (LCS) for the US Navy and military high-speed vessels for transport and humanitarian relief, such as the Expeditionary Fast Transport (EPF) vessel. The LCS is a 127-metre, Frigate sized vessel built at the Company’s facility in Mobile, Alabama.

The Company’s US subsidiary (Austal USA) manufactures US Navy vessels in Mobile, Alabama and provides maintenance support to ongoing Navy operations globally. Approximately 85% of group EBIT is generated from its US subsidiary, which operates as a prime contractor for the US Navy. That the US government represents the entire customer exposure of the US operations underpins the defensiveness and minimal customer risk associated
with this portion of the earnings base. A smaller, but increasing portion of earnings are generated from the Australasia segment.

At its interim results release, the Company lowered its revenue guidance for FY21 to $1.65b on the back of unfavourable currency impacts, lower US Support revenues, and COVID-19 delays.

ASB also outlined initial FY22 revenue guidance of $1.4b from contracted shipbuilding and EPF-15 as well as support revenue continuing at the 1H21 run rate. However, with the global vaccine roll-out and subsequent recovery from COVID-19 expected in FY22, revenue for FY22 could well be higher than the initial guidance of $1.4b.

Despite the lower revenue guidance, the Company reiterated EBIT guidance of A$125m, on the back of stronger margin expectations. To this end, margin expansion is expected to be generated from the US Shipbuilding segment, as the Company’s shipyards in Mobile, Alabama are becoming more efficient and the portion of support & maintenance work (which is higher margin in nature) steadily increases.

The US Department of Defense has signalled its intentions to boost naval spending and enlarge its naval fleet. The most recent FY22 30-year shipbuilding proposal announced in December 2020 includes an increase in Naval spending to US$147b (+44% compared with prior spending of US$102b) between FY22-26 and a 30-year 405-ship target (+14% on the prior ship target).

There are Significant Contract Opportunities

ASB has indicated that it has multiple new US defense opportunities to replenish its US shipbuilding order book, as LCS work starts to diminish from FY23. These include: i) Re-tender of the Offshore Patrol Cutter, ii) Light Amphibious Warships, iii) Large Unmanned Surface Vehicles and Next Generation Logistic Ships.

Despite losing out on the FFG(x) program to its competitor, there remains potential for a second FFG(x) shipbuilder. There has been a view that the winning bid and price paid may result in the FFG(x) program going over budget, potentially allowing another shipbuilder entry later in the program. Should ASB be selected as the second builder, it could represent a ~US$350-400m EBIT opportunity.

Beyond these opportunities, there is scope for the EPF program to be upsized in the upcoming US Navy budget.

Balance Sheet is in Excellent Shape

ASB’s net cash position has increased from $152.4m as at 31 December 2019 to $260m as at 31 December 2020. Accordingly, there is a high chance that the Company utilises its balance sheet position for one or more of a number of initiatives, especially as the Company had intended to build up cash reserves so as to prepare for a potential award under the FFG(x) program (which has not eventuated).

In particular, ASB could use its strong cash position to either: i) Pursue acquisitions (in particular a dry dock facility may be of interest, which the Company currently lacks,) ii) Repay debt, as there is ~$148m of debt on the balance sheet, iii) Pay higher dividends and iv) Continue investing in its existing facilities.

US Regulatory Investigation an Investment Risk

US regulatory authorities (notably the Department of Justice) are investigating ASB for the size of a write back taken in 2016 in relation to cost overruns for the construction of the initial LCS vessels (LCS 6 – 26).

The investigation by US regulatory authorities was initially announced by ASB to the ASX on 29 January 2019. AS recently commented that it remains of the view that they handled the matter appropriately following an external investigation by legal counsel hired by the Company. Notwithstanding, there still remains uncertainty in relation to:

The recent re-rating in the shares now sees ASB trading on a 1-year forward P/E multiple of ~11x, which is still well below its historical multiple range of 13x-18x over the last three years. We consider that there is a strong likelihood of the Company winning future defense contracts beyond the LCS program, as well as additional contracts within the Australasian business. While these new programs are likely to be lower-margin compared to the mature LCS and EPF programs, there is potential for the Company’s earnings base to grow materially over the medium-to-long term should ASB secure some of this work.

In relation to the US regulatory investigation, it is worth noting that similar investigations into US defense contractors indicates these that issues do not necessarily impact operations and/or long-tern fundamental value.

For over a year now, ASB has been trending lower. After dropping sharply in February, the share price tried to bounce but it has once again continued to drift. We can see that there is a major support level near $2, and we are now starting to see more of a base form. If the stock continues to head sideways in the next few weeks or so, instead of heading lower, then we can be confident that a good base is in place, and then it will just be a matter of waiting for a breakout from the base to provide the next buying opportunity.