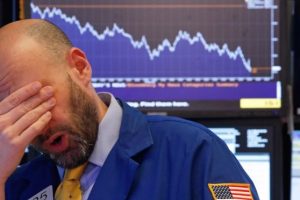 The month of October 2018 has been a rough ride for global stock markets. We had significant drops on the Australian market which saw the S&P/ASX 200 dropping 164.90 points on 25 October and was trading near its 12-month low. The Australian share market was down 10% from the 2018 highs. Although the market has had a significant drop, it would be classified as going through a correction and not a crash. A crash is more severe as recession and high unemployment can follow.

A definition of a stock market crash is when a 10% drop or more occurs in just one day. Market crashes usually occur every 7 to 10 years.

A market correction in comparison is a gradual decline where there is a fall of 10% before share prices start to recover again.

Corrections can occur over days, weeks and months. It is healthy for a market to have corrections of 5% to 10%. This is to prevent markets from being overpriced. The stock market can have several corrections a year. Irrational exuberance causes the stock prices to go up too quickly and a correction occurs when the prices return back to a fair level.

The main difference between a correction and a crash is the size of the decline in the stock market. Crashes are more severe and can lead into a bear market. A bear market is defined as a 20% drop from its recent high.

The corrections in the US market have been caused by high stock valuations by historical standards and these inflated asset markets have come under pressure from monetary tightening by the US Federal Reserve. Lower share prices are a more accurate representation of its worth.

What can happen after a stock market crash

When a crash occurs, consumers may feel unstable about their financial position and reduce their spending. The decline in discretionary spending can lead to a decrease in company earnings. Companies may choose to reduce costs by making employees redundant. If the economy weakens and mass redundancies occurs then this can affect housing prices. Job losses may cause home owners to default on mortgage payments. With the reduce demand for housing and home owners defaulting on loans, this can cause property values to fall. Banks can also suffer in stock market crash when it leads to a recession and home owners’ default on their loans.

Tulip Mania 1637 – Speculative investors were buying tulips at a premium thinking the price would continue to climb. Some tulips were traded for the price of a home. Buyers began to stop fulfilling their contracts and caused the bubble to pop. As sellers overwhelmed the market, the price of tulips went into free fall. This caused the market to panic and the country fell into an economic depression.

1929 Great Crash – On October 28 1929, the Dow Jones plunged nearly 13 percent, the market fell another 12 per cent the next day. During the 20’s the US economy was expanding and stock prices were at record highs. Ordinary people become interested in investing in stock investments and used margin loans to purchase stocks. The stock market was overpriced and this led to an asset bubble. The inflated share prices allowed companies to invest in their own production, however this caused overproduction and companies were forced to sell products at a loss. This caused their share prices to decrease which created panic in the market and desperate selling. Margin loans holders were forced to pay their loans immediately which intensified the selling activity causing a crash. The crash then also contributed to the great depression.

The GFC crash 2008– The main cause of the stock market crash of 2008 was the level of subprime mortgages. Banks were lending to people who had bad credit ratings who then struggled to pay the loans back. As these US banks were heavily exposed to these loans, it caused the demise of these banks. Investors began to sell their bank shares which create a prevailing emotion of fear in the markets and others stocks also began to fall.  The US then fell into a recession.