Gold is building up to the next rally

This post formed the basis of an article which then appeared in the Australian Financial Review on 31 August 2016. Michael Gable is a regular expert contributor to the AFR. You can access the AFR version HERE.

As we entered 2016, gold was trading at about US$1060 an ounce. It then embarked on a fantastic rally that saw it move above $1360 in the days after Brexit. Since then it has failed to go higher. The gold price has returned over 25 per cent this year, and gold stocks have done even better than that. The lack of movement during the last several weeks has seen many analysts get bored with gold and declare the rally to now be over. Our opinion is that they are wrong, and gold is actually readying itself for another impressive performance.

As the market went on to rally post-Brexit, gold failed to retreat into the shadows. Instead, it managed to stay well supported up at these levels. As recently as last week, we saw the chances of an interest rate rise in the US creep up. This was on the back of Janet Yellen’s comments at Jackson Hole. The US dollar rallied, and normally with higher rates and a higher dollar, you would expect gold to retreat. Remarkably it has instead, once again, been well supported. 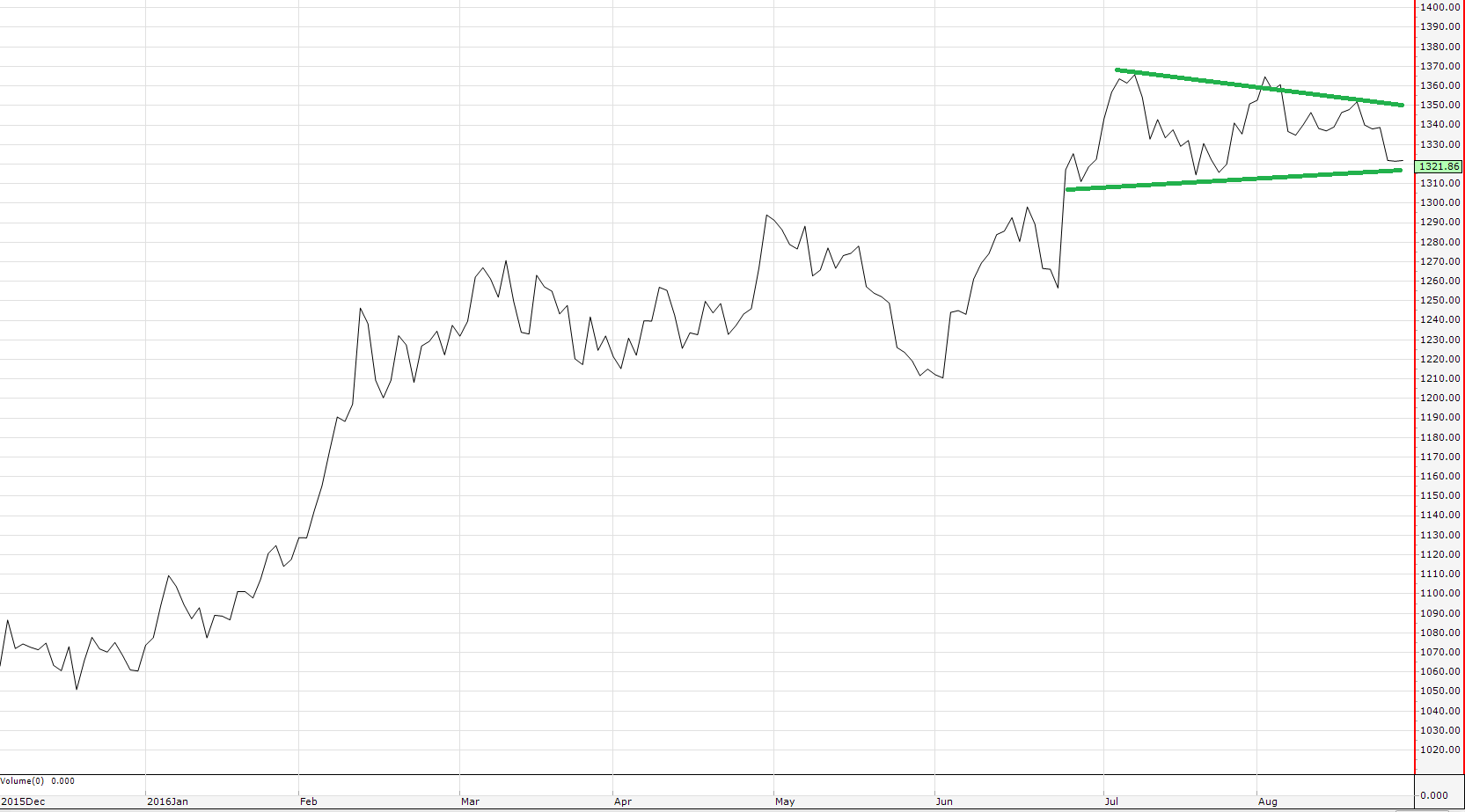 Looking at the gold chart reveals this bullish behaviour. The top for this year came in at the longer term downtrend line. Naturally this resistance will lead to a pullback. Instead, we can see that gold has essentially tracked sideways instead, hugging onto the downtrend line. This shorter term triangular formation is telling us that gold is taking a breather from its stellar performance in 2016, and is getting ready to do it all again. This graphically confirms our feeling of gold holding up very well. All we need to see now is gold pop its head above that downtrend line. That is, move into the higher $1300’s. This breakout will be followed strongly and we expect gold to then move swiftly towards $1500. What could cause this breakout? Markets in the US are starting to look toppy and as fund managers come back from vacation, volatility may start to pick up. The Australian market is already starting to look a little vulnerable in the short term. As fear starts to overcome the recent complacency, gold will be ready to shine once again. Investors have many ways to capture the gold price upside depending on their views and tolerance for risk. We have clients in ETF’s which include hedged and unhedged versions such as QAU and GOLD. Alternatively, you can get more bang for your buck by looking at some of the quality gold companies such as Evolution Mining and Northern Star Resources.

Make sure you bookmark our main blog page and come back regularly to check out the other articles and videos. You can also sign up for 8 weeks of our client research for free!