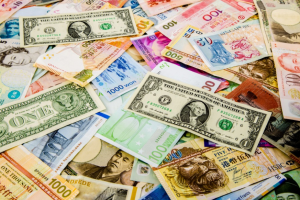 Share investors need to have an understanding of exchange rates because they will influence stock prices. Companies with overseas operations may be impacted positively or negatively depending on the direction on the exchange rates. Not only that, but exchange rates can influence the amount of overseas funds being invested in Australian shares. This article describes the 7 major causes of exchange rate movements. We have also discussed the effects of exchange rates on stocks in a previous  article on stocks to buy with a lower dollar.

Similarly, to the stock market, currency rates are based on demand and supply. Speculators buy currencies now in the hope it will appreciate and then sell at a profit in the future. If there are many investors who hold this view then this will drive up demand and it will increase the exchange rate. Sometimes the exchange rate movements are influenced by market sentiment as opposed to economic fundamentals.

If a country has high national debt and the market cannot see how this debt can be paid back then investors may sell their bonds. This could in turn lead to a devaluation in the currency. However, if a country has low debt then it will be perceived as a safe and stable currency. This will therefore increase the demand of the currency.