Stock market crashes and their recovery 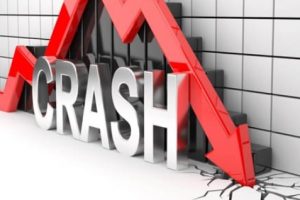 A stock market plunge can leave investors very nervous and create panic. However the odds are that stocks prices will be higher in three to five years after a bear market. Bull markets follow bear markets so investors who panicked and sold at the bottom of the market lost out on the gains when the market recovered. But overall if you look at the stock market on a long term view you will find that there are more years where the market return was positive compared to the years when the market return was negative.

The stock market crashed on this day and the Dow Jones plunged 23%. It was the largest one-day percentage point drop ever.  If you were an investor and had $10,000 invested before the cash, you would have been left with $7,700 however your investment would have surpassed $10,000 by October 20th of 1998.

If we look at the S&P500 on a long-term basis and track the yearly returns from 31/12/1928 we find that only 29 years were negative (the index closed lower than the year before) and 61 years were positive. This shows that the stock market overall returns more years with positive returns than negative. This also demonstrates that if the market does have a crash or pull back, it does eventually recover and heads up even higher.

The below chart shows the yearly returns on the S&P500 for the last 30 years beginning from 1970. Only 12 years have delivered negative returns and 37 years delivered positive returns.