Macro-Micro: Market life certainties: Banks (earnings) and Inflation (or not)

Big macro data piece for Australia this week – The RBA’s number one mandate is to maintain core inflation between 2% and 3%. Therefore, Wednesday’s CPI release will provide backing to the thesis that the RBA is out of the market for the foreseeable future as Australia’s CPI remains well below the target band.

To give the colour needed to understand why the RBA is unlikely to shift rates in the foreseeable future let’s look at past performance. 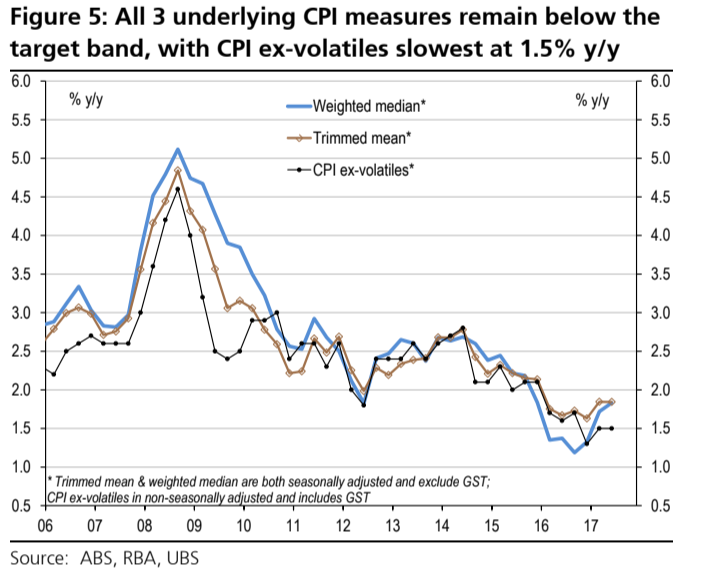 The chart above illustrates several issues around core CPI –

First is the end of the mining boom – the decline in core CPI particularly from the end of 2013 shows the decline in bulk commodity prices and the impact on related industries causing inflation to fall to decade lows.

Second, despite cutting rates several times over 2015 and 2016 inflation has not materialised and remains well below its target band of 2%-3% – something that is adding complexity to the RBA’s mandates.

Furthermore, when drilling down into the sector breakdowns of the points added to CPI there is a glaring issue – one sector is doing all the lifting. 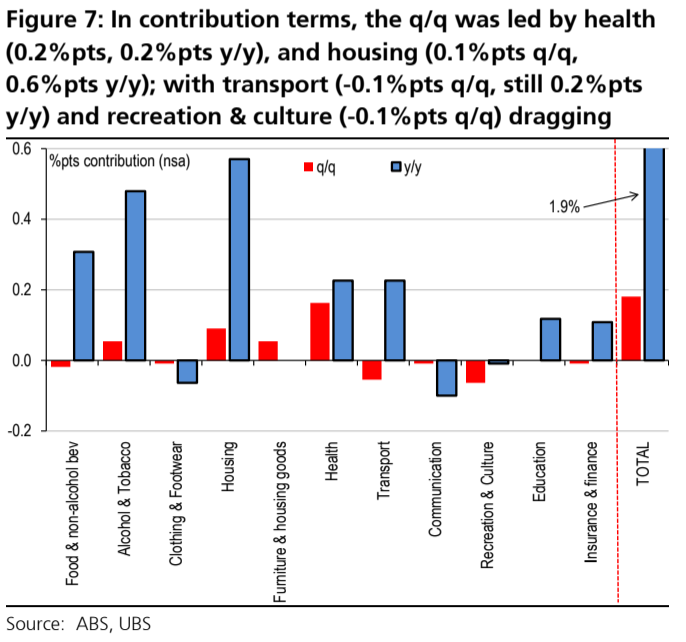 If one strips out Food and Alcohol from the figures, underlying core inputs into Australian CPI is from housing only. Having seen signs of decline in the housing markets in Sydney and Melbourne the upside impact of housing on inflation is likely to moderate in 2018 putting the RBA’s mandate just that bit further from reach.

The figure also illustrates that those sectors that rely on consumption i.e. discretionary, eating out, tourism etc. price inflation in these sectors has been stagnating – which is an indirect indictor wage growth – the core issue for inflation going forward.

Therefore, on the release of the data on Wednesday look to the trimmed mean figure for a first blush read of the RBA’s reaction to inflation.

Estimates are for a quarter on quarter read of 0.3% down from 0.5% and a year on year the estimate for the September quarter at 1.8% which would be unchanged from the previous June read. 20 basis point is still a reasonable distance from the target range and further to this point, the RBA is likely to want to see several quarters inside the band. In fact, judging by previous communication the RBA will want inflation to be expanding consistently over this period for it to have the conviction to pull the rate hike lever.

Therefore, wage growth is key to returning trimmed mean to 2% to 3% something that could occur based on the numbers seen in employment over 2017. However, at this point in the cycle this hasn’t translated into actuals and until this occurs – the RBA is out of the market.

The Micro side is also large:

The main bank earning season begins Thursday and finishes on the 6th of November with ANZ first then, MQG, NAB and WBC with CBA throwing in a quarterly update for good measure.

Therefore, want to take a very high-level view of what to expect for 2HFY17 and what FY18 is likely to entail.

Using CBA and BoQ as guided couple with the quarterly updates provided by all the results will be solid – anything less and markets will paint the wall red.

The impact of this should be

Conclusion from the retrospective data is likely to be a positive one and that coupled with global bank movements etc. is likely to see points added to the ASX and the banks.

The trading in the middle of the year should highlight the headwind of FY18 – The ASX and by proxy the Banks where stuck inside tight trading bands as upside beats are not going to materialise considering the slowdown in housing and the impact of macro-prudential policies take effect. Conversely the economic outlook is strengthening (employment is a big key here) and BDD are likely to remain low in H1 and even into H2 however this won’t continue forever.

The other side is the switch from IO to P&I – this will put pressure on margins and the housing slowdown will mean the organic growth through 2013 to present is also likely to look like yesterday’s story.

Evan Lucas is an expert guest contributor to Fairmont Equities.

Evan is founder of The Lucas Review. Prior to that he was Market Strategist at IG. He is well known as an expert commentator in finance media such as Sky News Business, ABC1, the Australian Financial Review, CNBC, and Reuters.